KAIBAB NATIONAL FOREST, Ariz. — Officials on the Tusayan Ranger District of the Kaibab National Forest are optimistic but remain cautious as fire crews begin to get the upper hand on and move closer to full containment on the Scott and Airstrip wildfires, which have been active incidents for nearly two weeks.

“Progress has been good and we are pleased to see a dramatic drop in fire behavior over the past two shifts,” incident commander Gregory Juvan said. “However we will continue to play it safe by positioning our forces to be ready for the possibility of fire to move rapidly again with high winds persisting in the forecast”

Both fires will continue to produce some visible smoke that may be noticeable from the communities of Tusayan, Valle, Cameron, Tuba City, and from both rims of the Grand Canyon and Highways 64 and 180. Fire managers will monitor smoke impacts closely, according to incident command updates, and will employ extra measures as necessary to minimize smoke impacts to the surrounding residential areas.

The Scott fire was discovered June 28 and has grown to approximately 2,580 acres in size with 25 percent perimeter containment as of Sunday afternoon. It is located in a remote area on the Coconino rim and Upper Basin 11 miles east of Tusayan near Forest roads 310 and 307.

According to a news release Sunday, firefighters are confident to be able to connect the hand and dozer lines on the remaining open portions of the fire that are in the more difficult steeper terrain. However, short runs of wind-driven fire are still being observed during afternoon hours.

A temporary trail and area closure order was put in place Thursday and a detour established on Forest Road 310 alongside the closed section of the Arizona Trail between the Grand View lookout tower and Forest Road 311 north of Russell tank. Trail users are asked to follow directions posted along the trail and avoid areas where active fire is present.

To ensure firefighter and public safety, forest visitors are asked to avoid driving into the fire area and where personnel are working.

A temporary flight restriction remains in effect over the area of the fire as well. The public is reminded that if drones fly, aerial firefighting support can’t fly as has occurred with neighboring Utah’s Saddle Fire four times in recent weeks. Both state and federal penalties may apply to those who interfere with fire suppression activities due to flying drones in a fire zone.

An area closure order on a section of the Arizona Trail remains in effect.

The Airstrip Fire was discovered on June 29 and is currently sized at 679 acres. The fire is located just south of the town of Tusayan on the east side of highway 64. According to the Sunday news release, the Airstrip Fire has seen no growth for several days.

Crews continue strengthening containment lines by extinguishing all hot material from the interior of the burned area that could potentially be lifted and carried across the holding lines by gusty winds. Increasing the depth of the cooled edges continues daily to help alleviate holding concerns. Containment estimates are not immediately available as this report publishes. 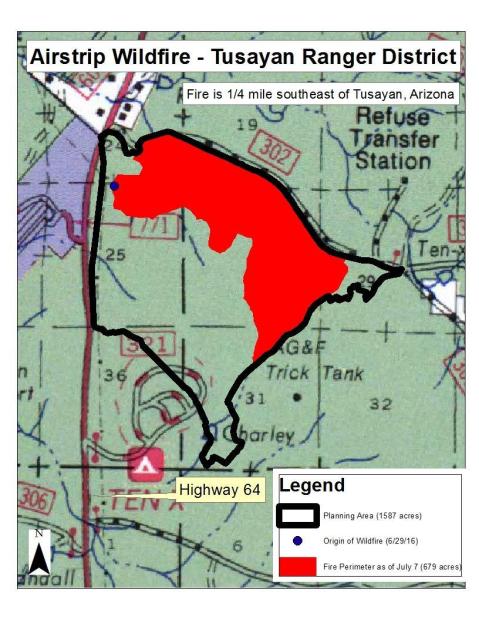 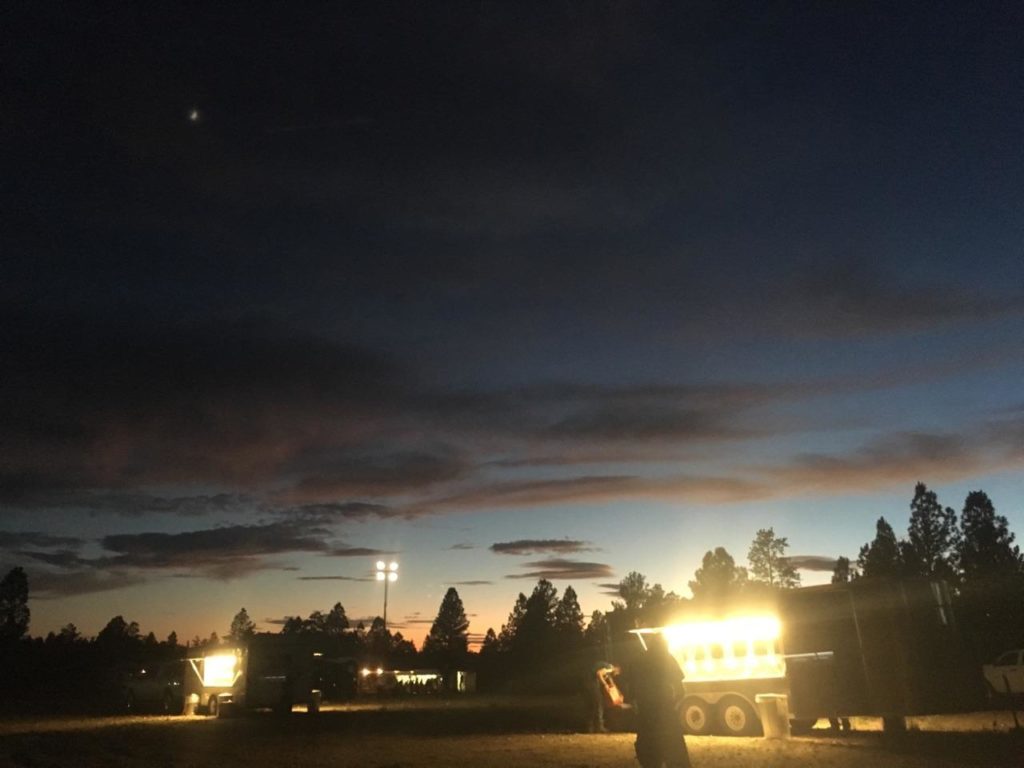 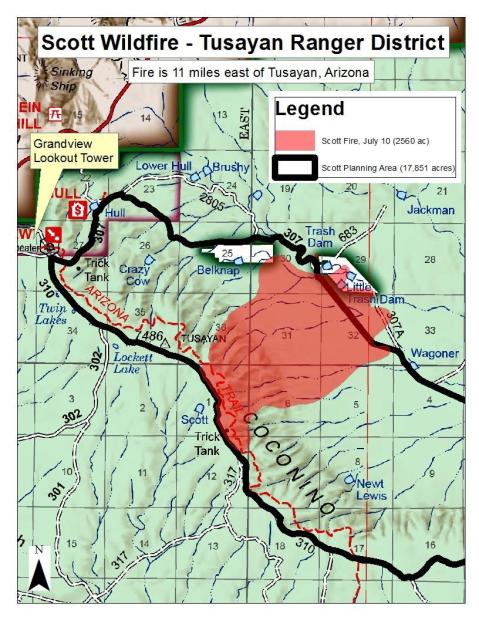 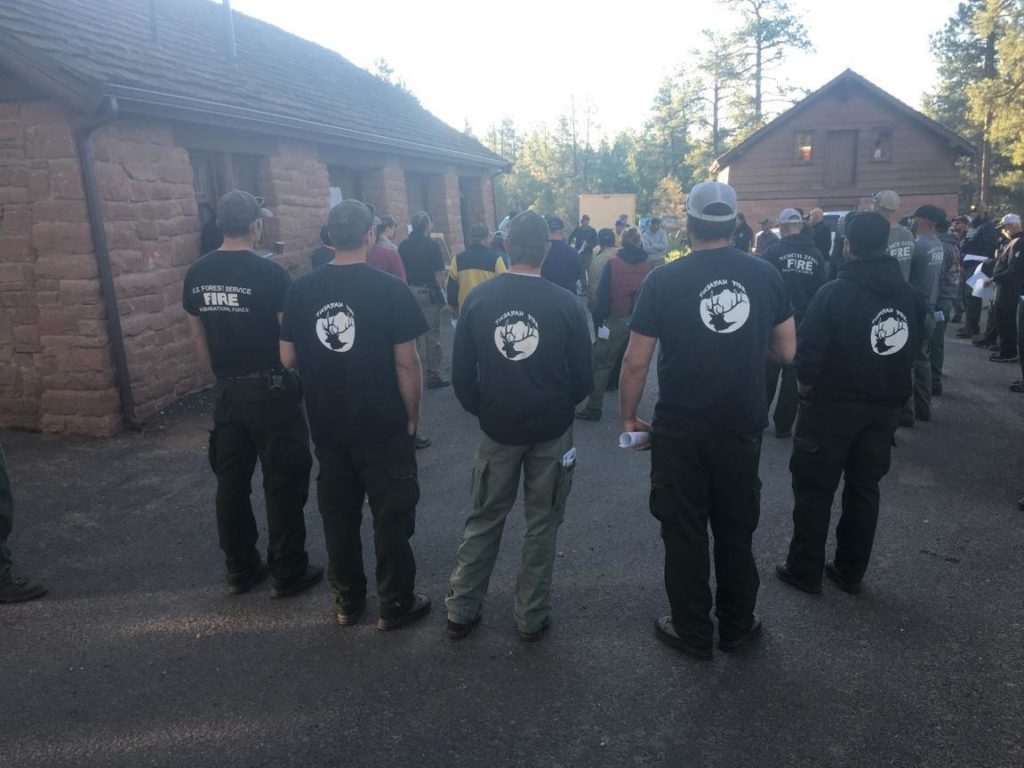 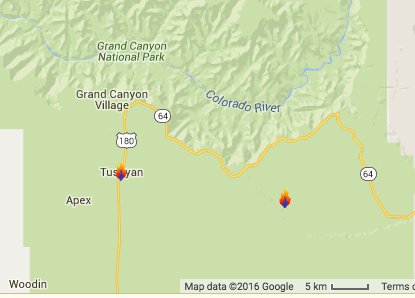 Map identifying location of two wildfires burning in Kaibab National Forest. On the left is the Airstrip fire, on the right is the Scott Fire. | Map courtesy of fire managers using Google maps; St. George News