ST. GEORGE — A Torah scroll – Judaism’s most important text – made its way to St. George from a synagogue in East Liverpool, Ohio, and a dedication ceremony was held Saturday at the Legacy Club House in honor of its arrival. The antique manuscript was used in services in the East Liverpool community for over three generations in a synagogue built in 1915.

Penny Lindenbaum, president of the Beit Chaverim Jewish Community of Southern Utah, called the dedication ceremony a “once in a lifetime event.”

The dedication of a new Torah is generally celebrated with a festivity, a custom similar to the biblical account of how King David welcomed the Ark of the Covenant into Jerusalem over 2,000 years ago, Rabbi Helene Ainbinder said.

This event was no different, Ainbinder said, and in accordance with traditions going back thousands of years, this mitzvah – or “good deed” – was followed by a meal.

“We are writing another chapter for this Torah after it served the community in East Liverpool for generations,” Lindenbaum said.

“We have received so much support in this community,” Lindenbaum said, “and the dedication is for the community as a whole.”

Every synagogue has a Torah, Lindenbaum said, and some have more than one. However, for smaller congregations such as theirs, it is rare to have a full-size Torah.

To have the opportunity to purchase a full-size Torah was unbelievable, Beit Chaverim’s secretary Ellen Nathan said, but in the end they were able to do it – thanks to serendipity.

The journey of the Torah from East Liverpool, Ohio, to St. George actually began with an anonymous donation of $10,000 to Beit Chaverim earlier in the year, Lindenbaum said.

“We had this donation and didn’t really know what to do with it,” she said, “so we just held onto it.”

Months later, a man walked into the Temple Sinai in Pittsburgh, Pennsylvania, and explained that his synagogue in East Liverpool was closing its doors after 100 years and that sadly, the building and its furnishings were up for sale, including two full-size Torah scrolls, Debi Berger-Manich said.

Berger-Manich is a resident of Pittsburgh, but she also owns a home in St. George and attends services at Beit Chaverim when she is in the area, she said.

She immediately thought of the congregation in Southern Utah and contacted Lindenbaum, asking if they would be interested in purchasing one of the scrolls.

Seeing the chance of a lifetime, Lindenbaum said yes, and within a few days, Beit Chaverim purchased the scroll.

Berger-Manich had the Torah sent from Ohio to the synagogue in Pittsburgh for safe keeping until it could continue on its journey out west.

The Torah did not have an ark, which is a receptacle that holds the scroll and is considered the holiest article in any synagogue after the Torah itself, according to information obtained from the Jewish Virtual Library.

Unable to transport the Torah without an ark, Pittsburgh furniture designer Garth Jones was commissioned to build it. After it was designed and crafted, the scroll was placed in it, Berger-Manich said, and shortly after, it was blessed by a rabbi in Pittsburgh.

The Torah, blessed and housed in the handcrafted ark, was then driven more than 2,000 miles and hand-delivered to Beit Chaverim Jewish Community of Southern Utah, under the care of Lindenbaum, who housed the manuscript until the dedication.

“It was the most relaxing 36-hour drive in my car,” Berger-Manich said. “And what a beautiful journey this Torah has had.”

The Torah includes the five books of Moses and 613 commandments. The scroll is hand-written by a pious scribe, known as a sofer, in the original Hebrew, and can take over a year to complete. According to Chabad.org:

Comprising between 62 and 84 sheets of parchment-cured, tanned, scraped and prepared according to exacting Torah law specifications-and containing exactly 304,805 letters, with 42 lines on each page … The sheets of parchment are then sewn together with sinews to form one long scroll

There are additional requirements, Chabad.org, describes:

Only black ink is acceptable in creation of the scroll. Ink of any other color is not considered kosher. Scribes prepare ink using gall-nut juice and gum, using various tints to gain the black color. The scribe writes with a feather pen or reed pen, filling its tip from the ink. Metal pens are not used because they might puncture the parchment, and iron was associated with war and death, which goes against the Torah’s purpose.

The letters of a Torah scroll are written in the “Assyrian” script, which is Hebrew calligraphy. The lines must be perfectly straight and even. Numerous laws detail the precise figure of each letter, and if even one letter is missing – or in some instances, merely cracked or smudged – the entire Torah scroll is not kosher, and the scribe starts over.

Once a Torah scroll is dedicated, it can be in use for decades and can pass from one generation to the next. The Torah dedicated on Saturday had been in use for over three generations and was estimated to be over 100 years old.

Consequently, Torah dedications are rare, and many in and out of the Jewish community can go their entire life without ever seeing one, Lindenbaum said. “And yet here we are.” 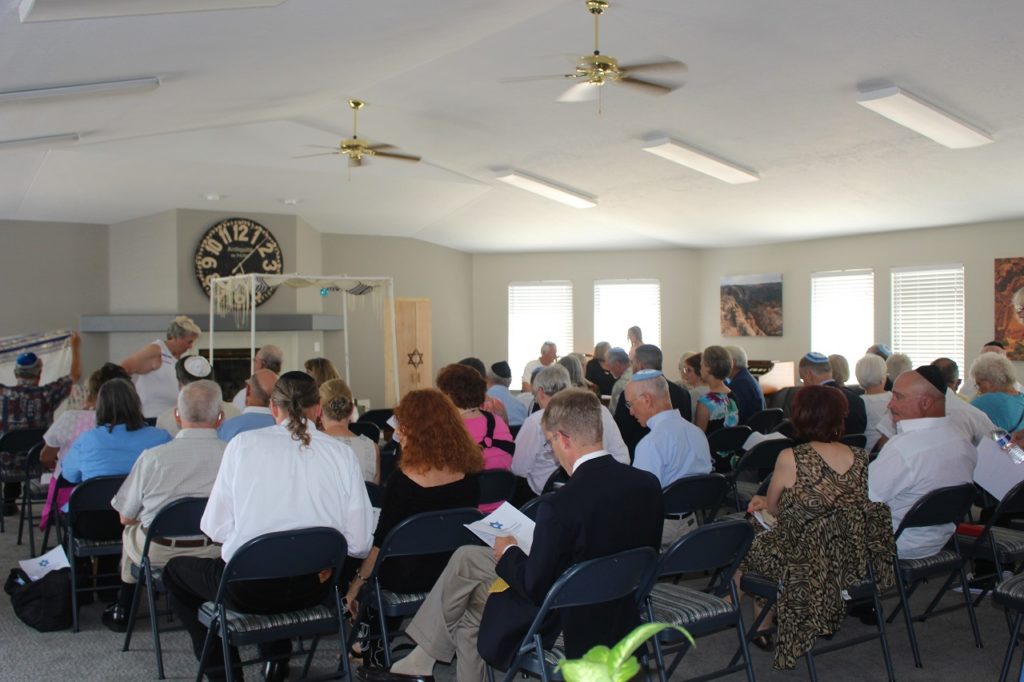 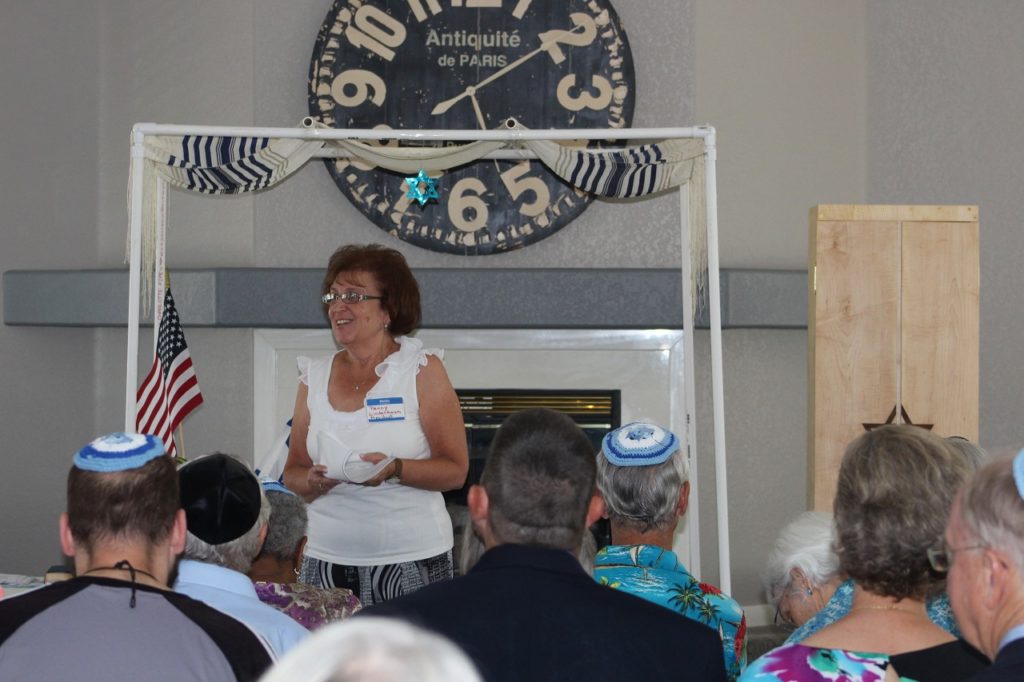 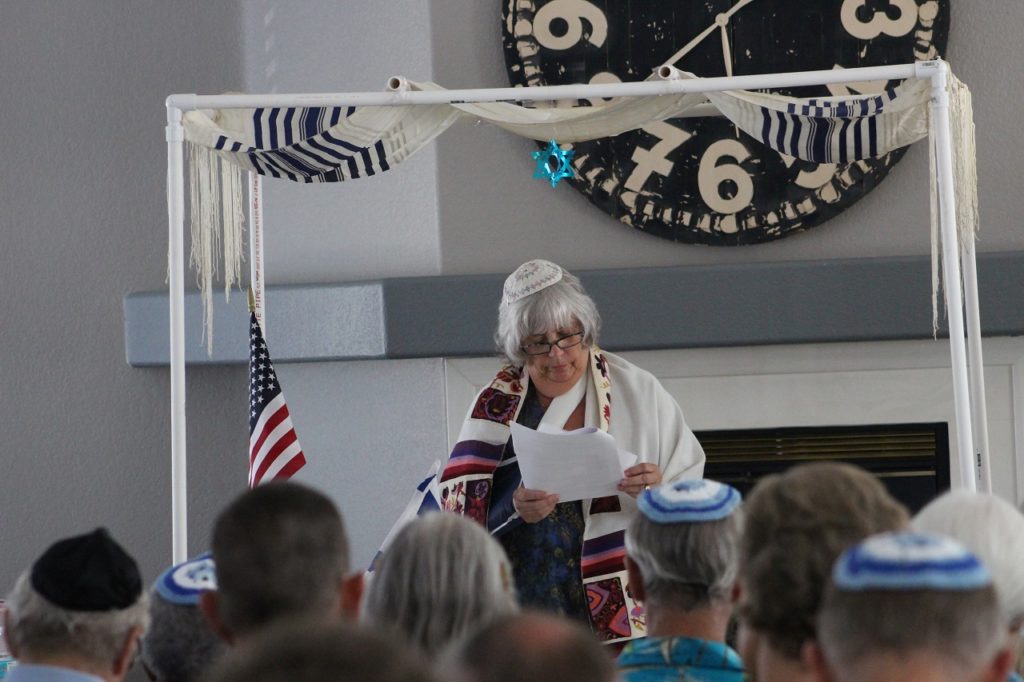 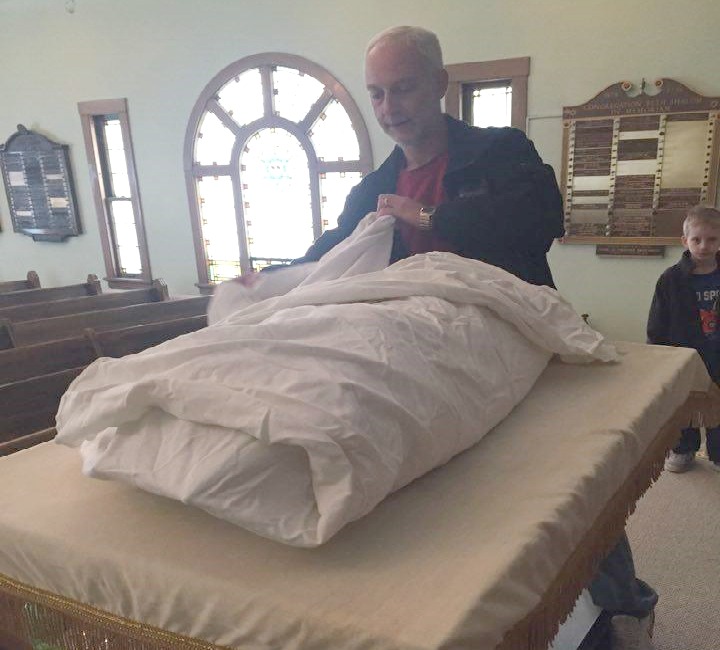 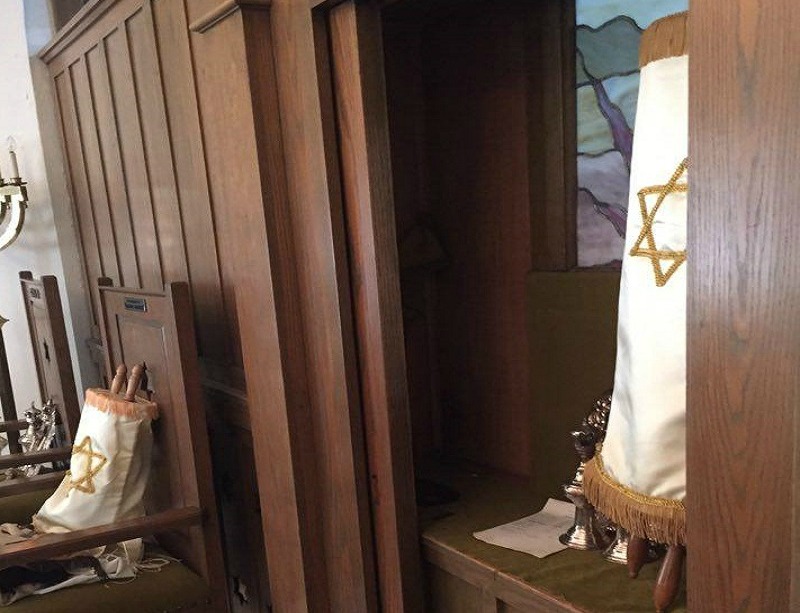 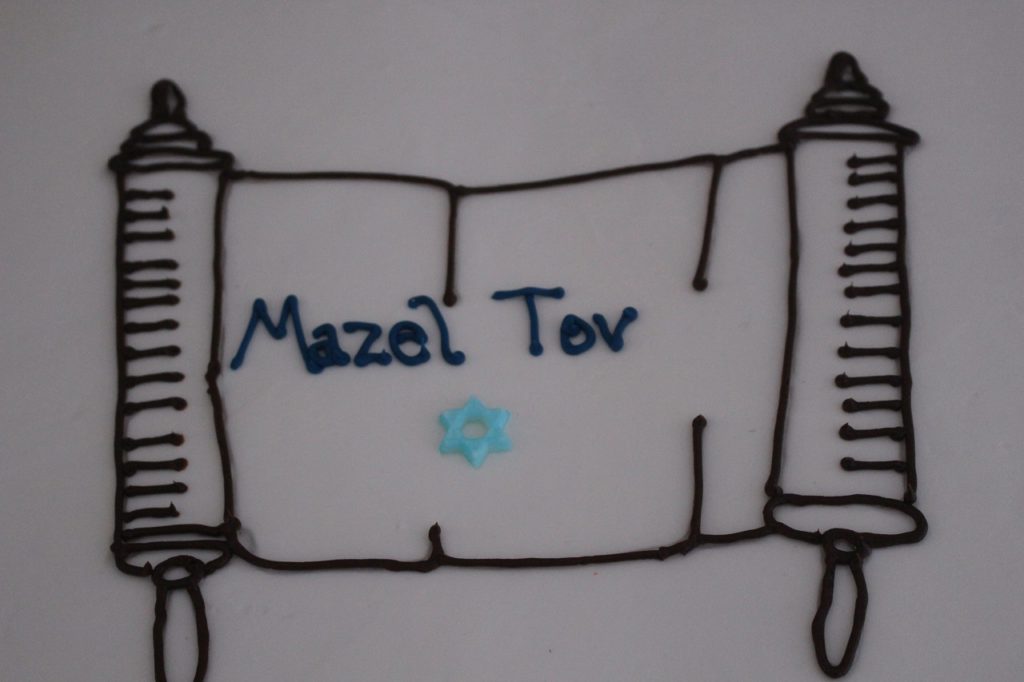 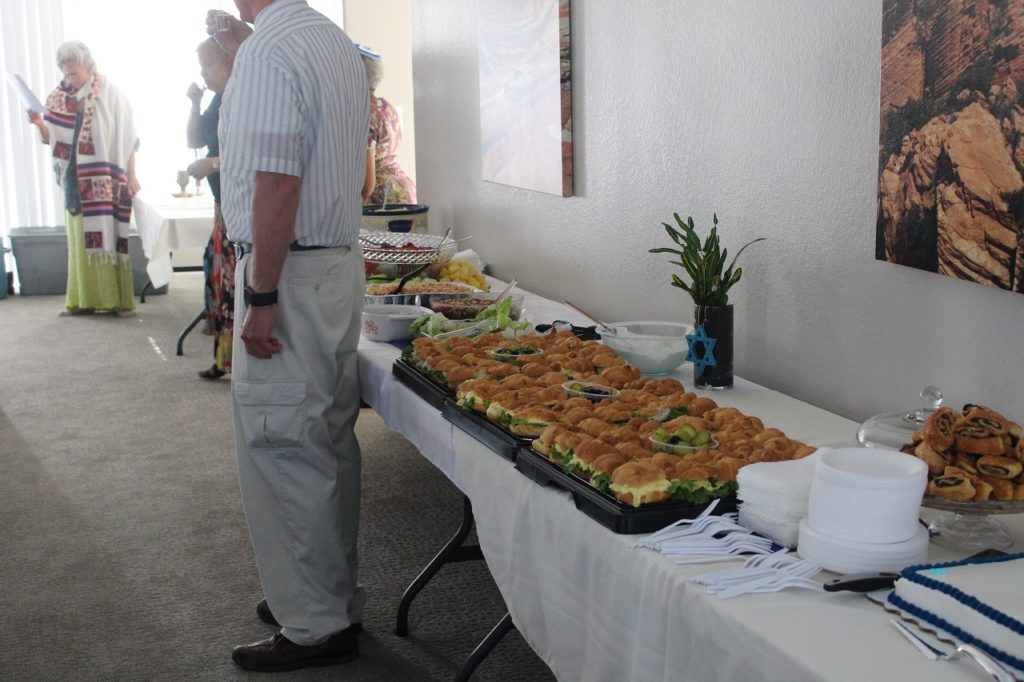 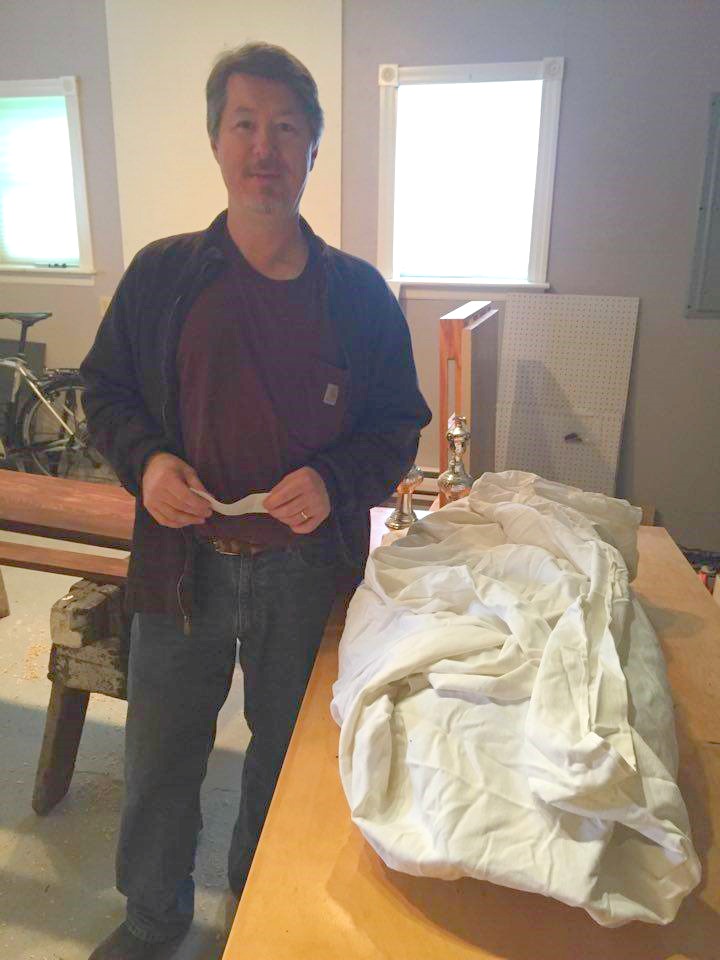 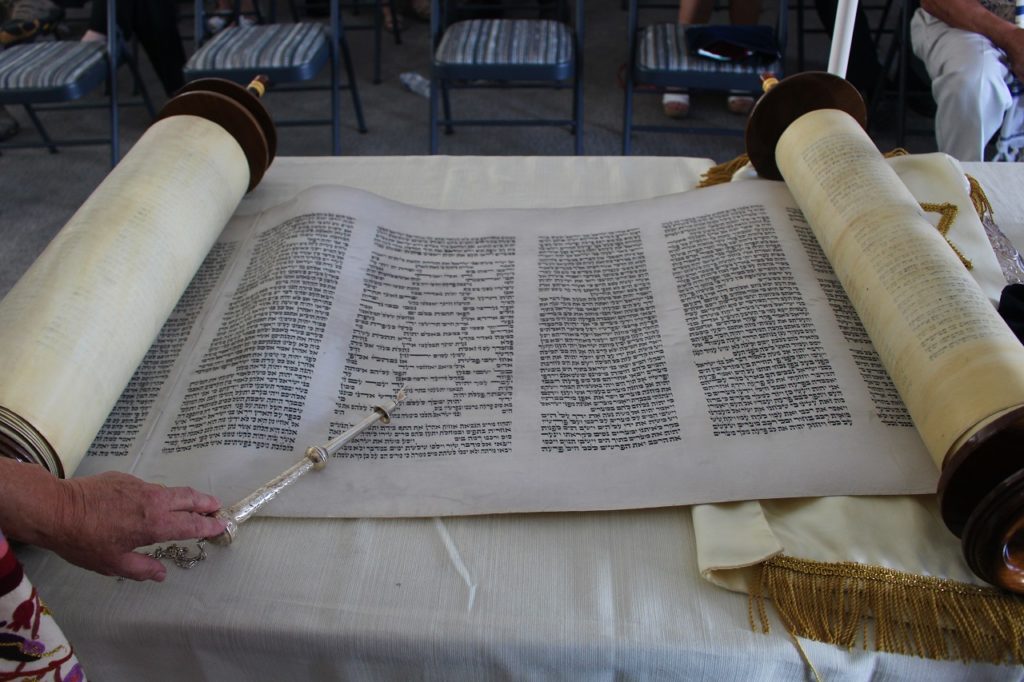 Holocaust remembered through 2 generations: Her name was on the list