ST. GEORGE — Citizens can join in celebration of patriotism, as Dixie High School kicks off homecoming week with a concert salute to America. 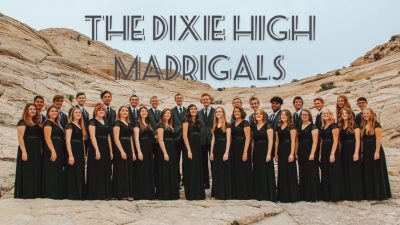 Themed “Americana and Patriotism,” the concert will be performed under the direction of choir director, Sheryl Snow. Snow, has taught choir at Dixie High School for 30 years. As one Snow’s former choir students, this event truly represents a homecoming for Dodge.

Dodge discovered his passion for singing in the most heartfelt of ways. While always having a strong love for music, his greatest fear was to share that passion publicly. On Sept. 11, 2001, as our great country suffered a terrorist attack, he was on a cruise ship outside of Mexico. That fateful day was when he made his decision to no longer be afraid.

He stepped up to the microphone aboard the ship to share his voice and love of music. He was no longer willing to let his fear keep him from what was truly his gift to the world. He opened up his heart and sang Garth Brooks’ song “The Dance.” After his performance, a passenger approached him and encouraged him to pursue a singing career. Just as many others were changed by the events of 9/11, Dodge took her words to heart and decided to follow his heart into the world of country music.

Dodge has been featured in America’s largest country music magazine, “Country Weekly” on several occasions, and on the popular website, Music News Nashville. He was also recognized as “New Country Star — Best Male Vocalist.” He has also appeared live on many television shows.

He has recorded many of his albums at OmniSound Studios in Nashville, Tennessee, where he worked with the best producers, songwriters, and musicians. In March of 2006, his first radio single, “Anything for You” was released and hit No. 19 on the New Music Weekly-Independent Artists chart.

His second Country album “Why Not Today” reached No. 3 on Amazons bestseller list and his album, “A Christmas Wish” sold thousands worldwide in its first season released. His fourth album, “Home to Me” was released in April 2010.

Dodge continues to produce and release new music and books to this day and has released eight full-length albums and two books to date. In 2013, he released his debut book called “Baby Steps to Music Industry Success.” It is a book about his journey and all the small steps he took that got him the music career and recognition he has today. He is also a member of the National Speakers Association where he gives musical keynote events across corporate America.

Dodge is a country boy at heart. When not on stage performing his favorite country songs, you can find him out riding horses or four-wheelers or camping out at his family’s ranch. He loves anything outdoors including fishing and hiking.

Summer, winter, spring or fall his favorite moments are sleeping outside by the campfire under the stars. From the brim of his hat to the tips of his boots, he is a true country boy.

Announcements are received from the public and are not the product of St. George News, its editors, staff or contributors. The matters stated and opinions included are the responsibility of the person submitting them. Announcements may be submitted for consideration to St. George News via our submission form.